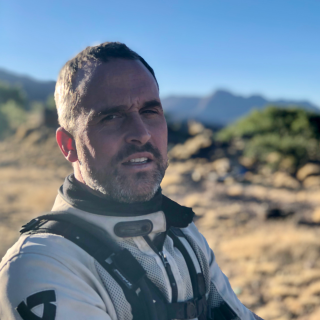 “Hey man, what you doin’ here? You makin’ people nervous.”

The man asking the question was in his mid-50s and wore a black fedora with a silver ribbon. He said his name was Michael. Smooth and friendly, Michael had the cool assurance of someone high-up the food chain.

It was dusk and I’d spent the last couple of hours in LA’s Skid Row wandering the streets and watching life play out. It was on the corner of 5th & Wall St. that I met Smooth Michael. We talked for a bit, shook hands and I relocated. I hate making crack dealers nervous.

I’d walked the nine blocks from my high-rise hotel with its spectacular views of the LA skyline to Skid Row to worship at Row Church, a ‘church without walls’ planted by Cue JnMarie, a former Virgin Records rapper, turned pastor, activist, and organizer. That short walk was the final leg of a brief and unsettling journey back and forth between contrasting versions of America, between the dream and the restless purgatory on its shadow-side.

That morning I had driven out of LA. I passed through Beverly Hills and Bel Air and went on to Malibu, where I walked on golden sand and admired beachfront villas with perfect vistas – perfect but for the sea-bound smog, visible in the distance to both north and south, a reminder of the true life of the city. To walk around downtown LA is to encounter the homeless, addicted and untreated mentally ill on each and every street. To walk in Skid Row is to walk with the walking wounded, to enter a dystopia the angels seem to have long since left. There are tents everywhere. Tents and shopping carts – shopping carts overflowing with what most would call ‘trash’ but these citizens call ‘home’.

They say rock-bottom is the firmest foundation on which to rebuild your life. The problem for the 200,000 Americans who sleep outside each night is, like the wrought iron fire escapes which adorn LA’s red-brick tenements, the rungs on the ladder don’t quite reach down to street level.

I encountered the same contradictions in Las Vegas. There I saw children, hair matted and clothes dirty, filing through the gates of the Rescue Mission’s night shelter. There I saw tables set, as they are every day, for 1,100 guests. The Rescue Mission is a lighthouse for the homeless and addicted of Vegas but to talk to those who lead its work is to realise that, despite annual gambling revenues on the Strip of $6.5 billion, there are no escape routes here either.

In Huntington, WV, there was a different paradox to explain. A leafy Appalachian city of 50,000 hugging the Ohio River, Huntington’s streets are lined with churches – more than 300 of them – and are home to a proud University and two large hospitals. Her people are not wealthy by US standards, unemployment is above the national average, yet Huntington is a city blessed with a sense of history and shared identity foreign to many from the large cities. However, in August 2016 the international media christened Huntington the ‘epicentre of the opioid crisis’ after 28 men and women overdosed, two of them fatally, in just five hours. In 2019 there were 878 overdoses in Huntington. In 2017 the number was 1831. Today an estimated 10%-20% of the population is in active addiction and more than 600 people are receiving treatment in residential settings.

As I fly south, towards home, the land of contradictions now below me, here’s my question. What does it mean to be the church, to be a follower of Jesus, in such a place? And not just ‘there’, but also where I’m going and where you live – places where the contrasts are less striking but the challenges no less real.

What does it mean to be the church in the age of addiction?

Firstly, it means turning toward, and listening to, the addicts in our midst. In Addiction and Virtue Kent Dunnington argues the addicted should be considered ‘unwitting modern prophets’ who “call society to profound change and the Christian church in particular to renewal.” The prophet unsettles. His voice is always an interruption. His message is often unwelcome. But the prophet speaks truth we need to hear; truth it is good for us to hear.

Secondly, being the church in the age of addiction means engaging with the public policy issues which profoundly shape our societies. It’s no accident the developed world’s large cities don’t all have a homelessness problem like LA’s. It’s the result of public policy. The same is true of Huntington’s addiction and overdose rates which are in large part the result of a failure to regulate the marketing and prescribing of opioid painkillers.

Thirdly, being the church in the age of addiction means working at getting our priorities right. “The Church,” wrote Archbishop William Temple in Christianity and the Social Order, “is the only society that does not exist for itself, but for those who live outside of it.” That book, published in 1942, played a significant role in the expansion of the UK’s welfare state to include a National Health Service, unemployment and sickness benefits, and social housing provision. But what of the Church? So many of our church communities remain resolutely inward-looking, with budgets, calendars, staffing/volunteering, and architecture all suggesting our real concern is for ourselves, not our neighbour.

Fourthly, being the church in the age of addiction means recognizing that whilst none of us can do it all, we can each do something – and when lots of people do ‘something’, things change. Today, Huntington calls itself the ‘epicentre of the solution’ to the opioid epidemic, and in the middle of those solutions there are lots of people each doing what they can.

In Huntington I met Jana who is calling the church to action, networking, and training across denominations and political dividing lines. I met Steve, who in his role as Mayor of Huntington has called the Church to prayer and brought political leadership to the situation. I met Steven, himself in recovery, who is one of 30+ faith leaders who serve as members of the city’s Quick Response Team. The team (comprised of a paramedic, police officer, recovery mentor, and faith leader) quickly seeks out those who have overdosed in order to offer a pathway to recovery. I met Eric, a Baptist pastor who has gently helped his wealthy church members to embrace a mission to a city so different to what it once was, and now leads them in a monthly ‘games and dessert’ evening with the men in one of the local rehabs.

Lastly, being the church in the age of addiction means pointing to someone – and somewhere – beyond ourselves. As the service at Row Church reached its conclusion, the streets dark and the air cold, we sang of Jesus and the amazing grace that “leads us home”. There is so much we can do to bring healing, wholeness and hope to those who are hurting and broken, right where we are. Skid Row, however, left me longing for the return of Christ and the coming of His Kingdom. Skid Row had me yearning for the new Jerusalem described in the Book of Revelation:

“I saw the Holy City, the new Jerusalem, coming down out of heaven from God, prepared as a bride beautifully dressed for her husband. And I heard a loud voice from the throne saying, “Look! God’s dwelling place is now among the people, and he will dwell with them. They will be his people, and God himself will be with them and be their God. He will wipe every tear from their eyes. There will be no more death or mourning or crying or pain, for the old order of things has passed away.” (Revelation 21:1-4)

Pastor Cue wrapped-up the service at Row Church and a simple meal was served. I spotted Smooth Michael across the street and went over to him. “Do you want something to eat?” I asked. He didn’t.

I said goodbye and began the short walk back to the dream side of America. A soundtrack of soul, R&B, and hip-hop plays all over Skid Row and after just a few steps I came across a group sitting around a fire, smoking and listening to music. As I passed I cracked a wry smile and said a prayer for Michael. Their track? Sade, Smooth Operator.